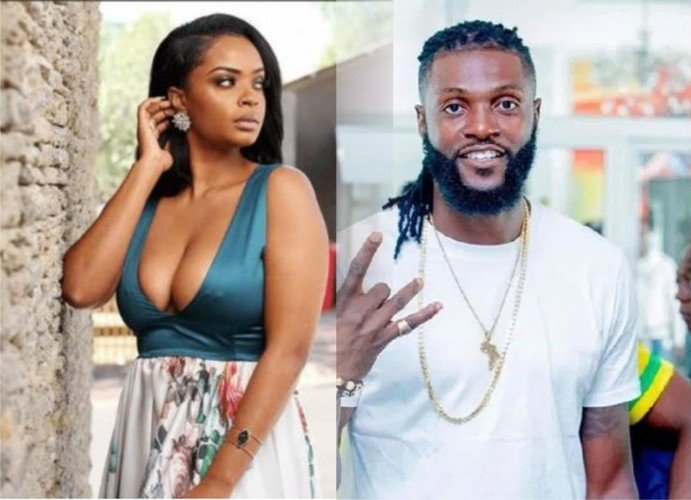 Big Brother Africa, 2013 winner, Dillish Mattews has finally disclosed why she broke up with former Arsenal striker, Emmanuel Adebayor.
Dillish and Adebayor broke up sometime in 2019. There were rumours that the relationship crashed based on cheating from one partner. However, Dillish via her Instagram handle denied the rumours during a question and answer session with her fans. A fan asked: “Did your ex-boyfriend cheat on you?”

Responding, Dillish said none of them cheated, revealing that she left the relationship because she got tired of being humiliated by the footballer on the internet.
Her post read: “it is really none of your business but I’ll like to make this clear; nobody cheated please. “I left because I got tired of the way I was being humiliated by him on the Internet.”

Dillish Mathews is the winner of the 2013 Big Brother Africa ‘The Chase winner’. She represented Namibia in the BBA contest making her the first Namibian housemate to win the continental reality TV show.
Dillish Mathews was born in Namibia. The celebrity is a Namibia but her father Abdi Guyo, a retired Kenyan soldier reportedly said that he was part of the Kenyan contingent peacekeeping force of the United Nations Transition Assistance Group (UNTAG).

Dillish is into Ice Cubes business branded as “Dillish Cool Cubes” the ices is been delivered to bars or restaurant in the country. In 2014 she launched her lipstick and lip gloss line called “Vault by Dillish” in Namibia and it was also launched in Zimbabwe, Zambia, Kenya, Nigeria and Tanzania. Dillish also co-owns a high definition hair Salon with Hellen Ngenokesho called “High Definition Spa” which she launched in 2014. High Definition Spa is a brand that prides itself by providing customers with high quality Brazilian hair, Lace wigs, Lace closures and products to maintain them such as curl activators ,silicon’s ,conditioner and shampoos at affordable prices.

Dillish Mathews opened a restaurant in 2015 called “Bolster Restaurant” that serves cuisine and class in equal measure. The restaurant serves both traditional Namibian favorites as well as international cuisine like the Portuguese food.

Emmanuel Adebayor is a Togolese professional footballer who plays as a striker. He previously played for English clubs Arsenal, Manchester City, Tottenham Hotspur and Crystal Palace, as well as French side Metz, Monégasque team Monaco, Spanish team Real Madrid, Turkish clubs İstanbul Başakşehir and Kayserispor, and Paraguay’s Olimpia Asunción. He was voted African Footballer of the Year for 2008 while playing at Arsenal, and during his latter career, he became the most iconic signing in Paraguayan football and the highest paid player in the country’s history when he joined Olimpia Asunción in 2020.

Adebayor represented the Togo national team at the 2006 FIFA World Cup in Germany, the country’s debut, and to date only, appearance at the World Cup. In January 2010, Adebayor was one of the players involved when the Togo team’s bus came under gunfire on the way to the 2010 Africa Cup of Nations in Angola, after which he retired from national team duty. In 2013, he returned to the Togo team for the 2013 African Cup of Nations in South Africa, where he helped them to qualify for the quarter-finals. He is currently Togo’s all-time top goal scorer with 32 goals.
He is presently married with a child.