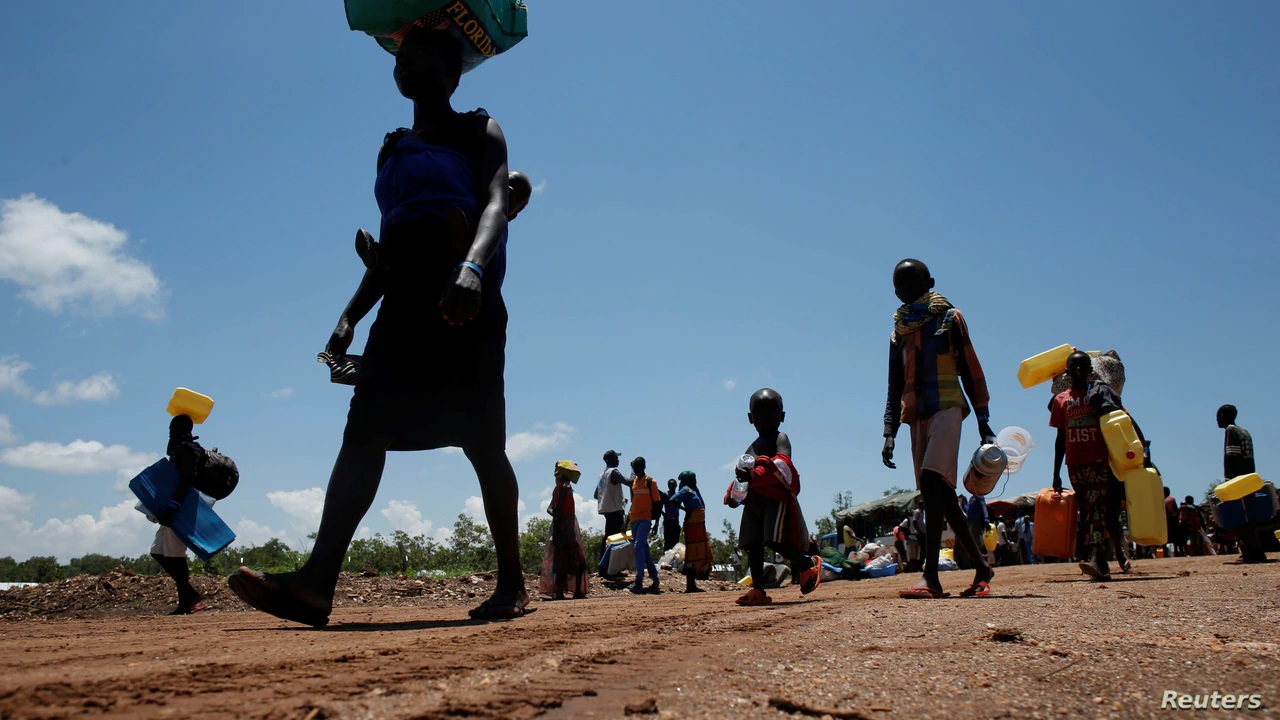 Eight people were reportedly killed in Uganda after a fight broke out between South Sudanese refugees and their host community.

Ugandan Police said the fighting between the refugees at the Rhino Refugee Settlement Camp and their Arua district host community was triggered by quarrels over a water source.

Titus Jogo, the officer in charge of the refugee desk in Obangi district, which borders Arua, said a host community member was killed in a one on one fight with a refugee.

After that, the host community mobilised and attacked the camp.

Details on whether the eight were refugees or from the host community are unclear.

Mr Jogo further said no arrests had been made but there was a heavy police presence in the area.

He added that many refugees are reportedly missing but could not confirm the number of those killed in the host community.

In July 2018, more than 40 houses of South Sudanese refugees were burned down in Ayilo Camp in Adjumani district by the host community.

This followed allegations that a teenage girl was raped and killed by some refugees. Police later said the death was due to a snake bite.

In December 2019, four people were killed and 16 wounded in Uganda’s Adjumani district.

In July, an ethnic fight instigated by the alleged theft of maize from a farm left many injured and hundreds of houses burnt down in Palorinya refugee settlement in Obangi district.

According to UNHCR, the Rhino camp is Uganda’s fourth largest refugee settlement area, with a population of 102,000 South Sudanese refugees as of August 2017.

Related Topics:FeaturedRefugeesRhinoSouth Sudan
Up Next

In case you missed it, here are the stories across Africa that made the headlines on Friday, October 23rd 2020, all in one minute.
——
Do well to click on the link in our bio to read more on these stories and other stories about #Africa
—–
#AfricaFirst #AfricanNews

President Muhammadu Buhari says that the initial genuine and well-intended protest of youths in parts of the country against the Special Anti-Robbery Squad (SARS) was hijacked and misdirected. President Buhari further described the whole incident as unfortunate during the virtual meeting with former Heads of State and Presidents of Nigeria on Friday in Abuja.

Special Adviser to the President on Media and Publicity, Femi Adeshina disclosured details of the meeting in statement.
President Buhari reiterated that the Government will not fold its arms and allow miscreants and criminals continue to perpetrate acts of hooliganism in the country.

The President recounted the initial concessions made by his administration on the demands of youths protesting against the excesses of some members of the SARS.

He recalled that the youths had demanded that the squad be disbanded, and further articulated the additional demands, including:

”The immediate release of all arrested protesters.

”Justice for deceased victims of police brutality and appropriate compensation for their families.

”Setting up an independent body to oversee the investigation and prosecution of all reports of Police misconduct within 10 days.

”Psychological evaluation and re-training of all disbanded SARS officers before they can be re-deployed; and increase in Police salary.”

The President declared: ”We accepted all the demands and proceeded immediately to scrap SARS and started the process of addressing the other demands.

”Unfortunately, the protesters refused to call off the protest and engage the Government to address their grievances. Instead, they became emboldened and gradually turned violent.”

President Buhari expressed concern that in the mayhem that ensued, many lives have been lost, a number of public and private properties completely destroyed or vandalized.

Reiterating his pledge to Nigerians from the nationwide broadcast Thursday, the President reaffirmed:

”We will continue to improve good governance through our democratic process including through sustained engagement.

”We shall also continue to ensure that liberty and freedom, as well as the fundamental rights of all citizens are protected. Here, I want to also reaffirm our commitment to preserving the unity of this country.”

The President thanked the former Heads of State for attending the meeting and their invaluable comments, observations and advice, adding that ”Nigerians expect nothing less from responsible statesmen.”

Each of the former leaders commended President Buhari for steps taken so far to restore calm and order to the country and also applauded the presidential broadcast of Thursday as detailed and soothing to the country.

”I commend the speech of last night. The nation had been waiting. You made points that I believe need to be commended. Peaceful demonstration is part of democratic practice. The demands of the genuine protesters were accepted, and you are working on implementation. We commend you,” former President, Olusegun Obasanjo, said.

The former heads of state were unanimous in their view that generation of employment and growing the economy including through direct foreign investments were critical to checking youth restiveness.

They also expressed their condolences to the bereaved families of civilians, policemen and soldiers killed as a result of the violent protest, and reaffirmed the commitment to respect the fundamental rights of citizens, including for peaceful protest as enshrined in the Constitution.

The former Heads of State also condemned the divisive and inciting pronouncements of separatists, and were of the opinion that such acts should be stopped.

Equally, the former Leaders commended the actions taken by Governors to address the demands of the ENDSARS protesters and their efforts to check the excesses of those who perpetrated violent acts and conduct.

Finally, they called on youths to pursue peaceful means, in seeking redress through engagement with Government and encouraged further conversation with the youths and other stakeholders in the country. 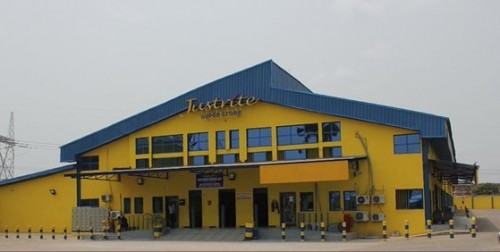 Justrite Superstore, a merchandising outfit involved in commodity trading has openly come out to say they stand with Nigeria despite the fact that they have also had a fair share of the attacks by hoodlums in some of their stores in Lagos and Osun state.

”Our Bariga store was attacked and vandalized by looters on Wednesday, Octoer 21, 2020 in the midst of the general breakdown of law and order in Lagos State. Our other Stores at Ikorodu and Iju (Lagos neighbourhoods) and Osogbo (Osun State capital) were also threatened by arsonists. These should be worrisome development to any business.

However, as a company, our bigger concerns are with our great nation (Nigeria) and Nigerians’ well being. Our faith in Nigeria and optimism about her future are unshaken. It is therefore our hope and aspiration that there would be a peaceful resolution to all issues in contention and our dear Nigeria will resume its journey towards greatness.

We are immensely grateful to all our numerous customers and other stakeholders for your kind messages and love. Be assured that we would do our best to ensure that our commitments to you are not affected negatively.

We mourn with the nation and all affected families for their loss and injuries. Our brand has always been a proud supporter of communal progress and in fact will continue to be” A statement by the organization reads.


This statement was released after they came out to say that their superstore is neither owned by the Tinubu or the Obasanjo dynasty, shortly after the vandalizaation of The Toll plaza and parts of Oriental hotel

They revealed that their Organization majorly consists of young Nigerians working for them, and they have also been been harrassed by the police force, and they hope an end is brought to this misabnormalties of the force to enable their staff work efficiently without fear or abuse.


”We fully support the #EndSars movement and the call to #EndPoliceBrutalityInNigeria. The youth comprises a huge part of our workforce and many of them have also experienced police profiling, harassment and brutality.

We share the desire for them and other youths to be able to work freely, without fear or abuse. We mourn with the nation over our fallen youths whose only crime was to express their riights for a better life. May their deaths not be in vain.”

Justrite Superstores also disclosed how relevant they have been to the citizens of Lagos, Ogun and Osun state, stating categorically that the people of those states habe benefitted from them, especially during the Covid-19 lockdown.

”Our brand has always been a proud supporter of continual progress and in fact contributed hugely towards citizens’ support in Lagos, Ogun and Osun States during the Covid-19 lockdown.”