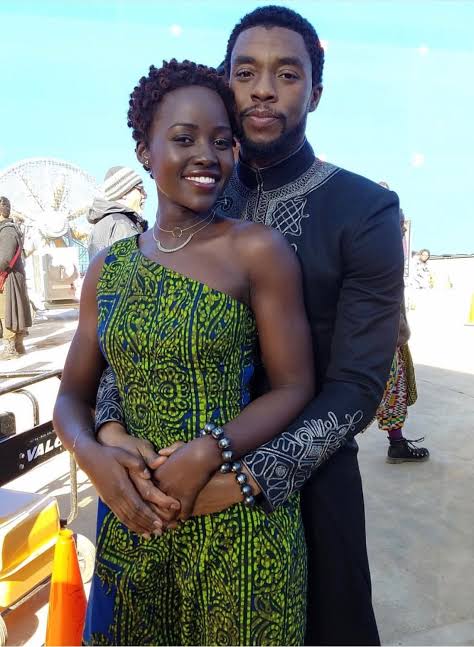 Kenyan actress and author Lupita Nyong’o has finally opened up on the death of iconic actor Chadwick Boseman who passed on August 28 after battling colon cancer for four years.

Chadwick’s death came as a shock to whole world as he never spoke about his illness. Although, he was evidently losing weight as a result of the illness, many thought it was a conscious effort for a new movie role.
Lupita Nyong’o took to her Instagram page to pay tribute to the late Boseman and she wrote;

“I write these words from a place of hopelessness, to honor a man who had great hope. I am struggling to think and speak about my friend, Chadwick Boseman, in the past tense. It doesn’t make sense. The news of his passing is a punch to my gut every morning,”
“I am aware that we are all mortal, but you come across some people in life that possess a immortal energy, that seem like they have existed before, that are exactly where they are supposed to always be – here! … that seem ageless…. Chadwick was one of those people.”
She admitted that although she didn’t know Boseman for long, he greatly influenced her life.

“Chadwick was a man who made the most of his time, and somehow also managed to take his time. I didn’t know him for long, but he had a profound effect on me in the time that I did. When we came together to make Black Panther, I remember being struck by his quiet, powerful presence,” she wrote.
“He had no airs about him, but there was a higher frequency that he seemed to operate from. You got the sense that he was fully present and also somehow fully aware of things in the distant future. As a result, I noticed that Chadwick never seemed rushed! He commanded his time with ease.”

Nyong’o remembered Boseman’s time on the set of “Black Panther,” noting that his presence alone created an “ego-free environment”.

Nyong’o who began her career in Hollywood as a production assistant in 2008, made her acting debut with the short film East River and subsequently returned to Kenya to star in the television series Shuga (2009–2012).

Also in 2009, she wrote, produced and directed the documentary In My Genes after which she pursued a master’s degree in acting from the Yale School of Drama. Soon after her graduation, she had her first feature film role as Patsey in Steve McQueen’s biographical period drama 12 Years a Slave (2013), for which she received critical acclaim and won several awards, including the Academy Award for Best Supporting Actress.

She became the first Kenyan and Mexican actress to win an Academy Award. The actress went further in her tribute to Chadwick to send condolences to the family of the painfully late Chadwick leaving everyone with a phrase from the actor’s wife, Simone which read #takeyourtimebutdontwasteyourtime.

The post consisted of a picture of the actress and Chadwick happily laughing and the write up. She captioned the post “For the beloved #ChadwickBoseman #TakeyourtimebutDontwasteyourtime.”