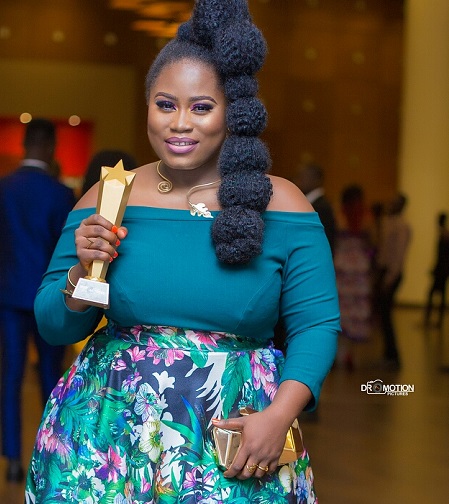 Outspoken Ghanaian actress and filmmaker, Lydia Forson finds it disturbing that Ghanaians are now hailing Kwame Owusu Fodjour aka Dr. UN after he scammed Ghanaian politicians and other A-list celebs in his infamous Global Humanitarian UN Award which was held on August 28, 2020.

Lydia Forson obviously cannot fathom why series of videos of Dr. UN being mobbed by some Ghanaians after he stepped out to some commercial locations in Accra have gone viral on the internet, just like his unprecedented stunt which made the likes of Sarkodie, D Black, Chairman Wontumi and the rest a laughing stock on the internet.

Taking to her Facebook platform, the bubbly actress wrote;
“Ok. So it’s not funny anymore.
Why is this DR-UN being given platforms and hailed as some kind of hero, even if it’s just for laughs?
Do we understand the dangerous precedence we’re setting by enabling this type of behaviour? Soon you’ll come and write epistles about poorly behaved children on here when there doesn’t seem to be any repercussions for poorly behaved adults. Was it funny in the moment, yes and even I’m guilty of indulging, but you will do ah he will get his own tv show?”

Lydia Forson was born 24th October 1984. She is a Ghanaian actress, writer, and producer. In 2010 she won the African Movie Academy Award for Best Actress in a Leading Role. Lydia was born in Mankessim, Ghana. She received her early education at Wilmore Elementary School in Kentucky. At the age of nine, her family moved to Ghana, where she continued her education at Akosombo International School. She also attended St. Louis Secondary School, Kumasi, where she completed her secondary school education.

Forson graduated from the University of Ghana, earning a bachelor’s degree in English Language and Information Studies.
Forson’s acting career started with a cameo role in Hotel St. James (2005), Run Baby Run (2006), Different Shades of Blue (2007) and a stint in the reality show The Next Movie Star in Nigeria (2007). Shirley Frimpong Manso, CEO of Sparrow Productions, who had previously worked with her in the Ghanaian television series Different Shades of Blue, brought Forson back to the screens through the movie Scorned. This starring role led to her first African Movie Academy Awards (AMAA) nomination as the Best Upcoming Female Actress.

In 2009, Forson starred in the award-winning The Perfect Picture by Shirley Frimpong-Manso. She has starred in A Sting in a Tale, Phone Swap and Masquerades.