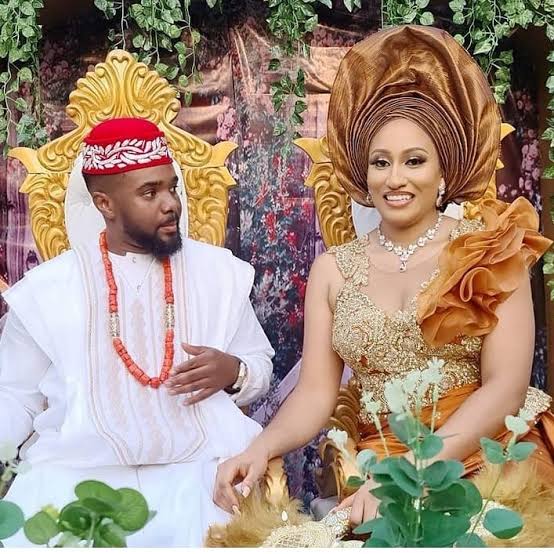 Actor and humanitarian, Williams Uchemba recently got married to his sweetheart of over four (4) years; Brunella Oscar.

The new bride has now answered the questions on everyone’s heart as she opened up about how she met and fell in love with the actor.

Congratulatory messages have been pouring in for actor Williams Uchemba and Brunella Oscar following their traditional wedding ceremony.

Although, it took a lot of people by surprise, as people did not see it coming, until he announced his engagement a week ago.
Brunella, recently shared some interesting new details about how they met and eventually fell in love.

The newly wedded bride revealed she stumbled on a video of Williams preaching the gospel on Facebook in 2017 and she immediately knew he was meant to be her husband.
“The video was about 15 mins long but 30 seconds into the video I heard a voice saying ‘This is my husband!’ I had no idea who this guy was, never even heard of his name before but I felt the urge to message him on FB messenger just to encourage him to do more and never give up on his passion.

“I immediately clicked on his name, noticed it was a “fan page” but didn’t think too much of it because I thought that maybe he was a motivational speaker of some sorts. So I messaged him but I was not expecting a reply. At the time I had just started my MSc. Degree 2 months ago and I vividly remember going to uni the next day all happy and smiling, telling all my friends that I had met my husband the night before. My friends can bear me witness because they thought I was crazy when I narrated the circumstance surrounding my statement (bearing in mind I hadn’t got a reply yet!).” She said.

The meeting was held to discuss a number of issues the Egypt’s tourism sector is facing, and to identify the challenges and obstacles the vital sector faces in light of the second wave of the global coronavirus pandemic. 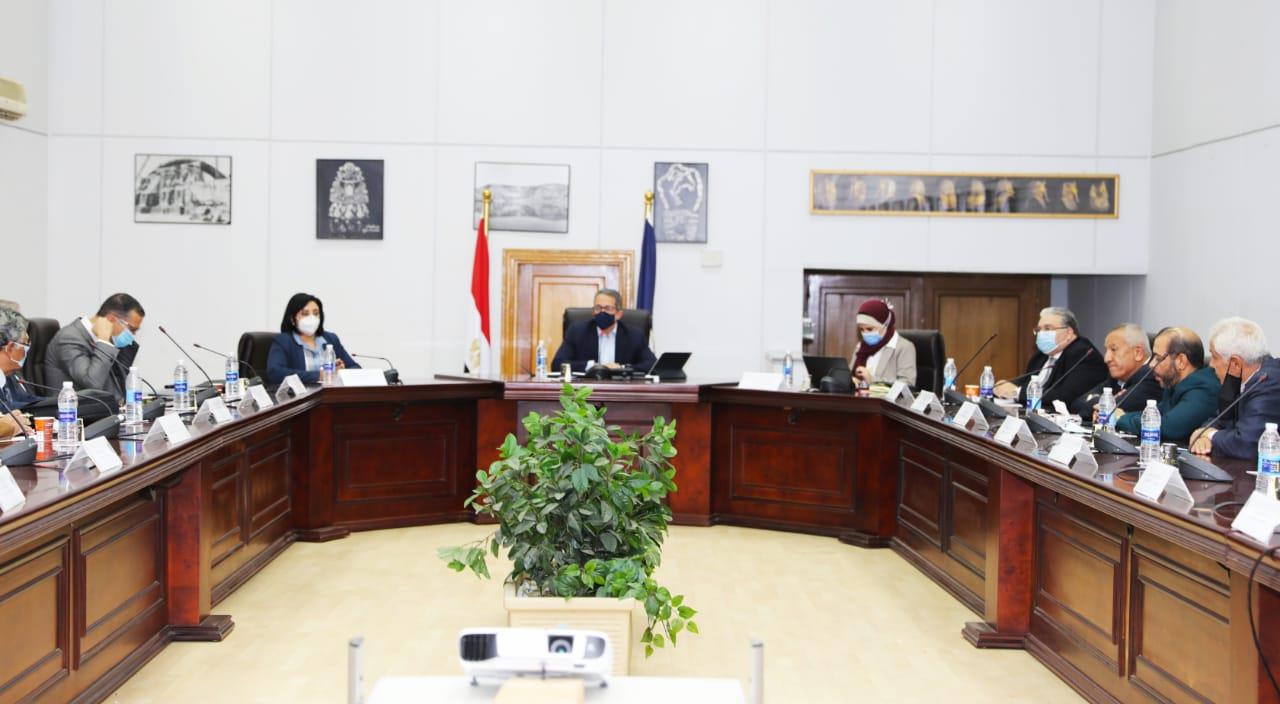 Egypt’s Minister of Tourism and Antiquities Khaled Al-Anani has held an expanded meeting with representatives from Egypt’s private tourism sector.

Some of those who were in attendance at the meeting were the President of the Egyptian Federation of Tourist Chambers, heads of chambers, heads of tourist investor associations, and tourism investors.

The meeting was held to discuss a number of issues Egypt’s tourism sector is facing, and to identify the challenges and obstacles the vital sector faces in light of the second wave of the global coronavirus pandemic.

It was also an opportunity for proposals to be submitted, and for a review of future visions for the advancement of Egypt’s tourism.

The meeting began with a review of the current situation and mechanisms of work in the sector.

Al-Anani clarified some matters relating to new opening and closing times for tourist facilities, including restaurants and cafeterias, and the exceptions permitted under the decision.

He also clarified the regulations under the tourism and hotel establishment draft law, which will soon be presented to the cabinet.

The law aims to organise the mechanism of action in this regard, and end all obstacles and problems that investors face in Egypt’s tourism sector.

During the meeting, Al-Anani took the opportunity to listen to the problems faced by investors, and their demands and proposals.

These include the problems they have faced with debts and the payment of dues for the use of facilities and some fees for government agencies.

The investors also called for the grace period to be extended for the initiative that covers defaulters repaying bank loans, and which falls under the Central Bank of Egypt (CBE) initiative.

The minister added that the state spares no effort in promoting Egypt’s tourism sector, and to help it overcome all possible obstacles. At the same time, the Egyptian government is working to provide the necessary support to alleviate the burdens on this important sector.

This comes as part of the cabinet decisions and the precautionary measures adopted by the state to preserve the safety of workers in the sector, as well as citizens and tourists.

During the meeting, many mechanisms and proposals that will contribute to increasing the tourist flow to Egypt from different markets were also discussed, in addition to ways to activate the internal tourism movement.

Al-Anani also touched on the existing cooperation with the concerned ministries, especially the Ministry of Civil Aviation, to study the possibility of undertaking marketing initiatives.

These aim to encourage domestic tourism, including granting discounts on domestic airline tickets prices, and providing discounts on tickets to museums and various archaeological sites in Egypt’s tourist cities.

The meeting also touched on the importance of coordination and joint cooperation between the Ministry of Tourism and Antiquities and the private sector.

This will see promotional campaigns for Egypt intensified, that will also serve to highlight the diversity of the country’s tourist destinations. 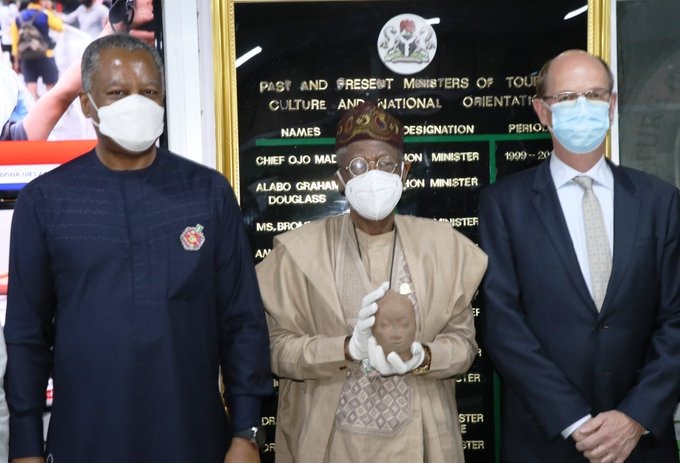 The Nigerian Government has formally received a six-century old repatriated Ife Terracotta Head from the Kingdom of the Netherlands.

Nigeria’s Minister of Information and Culture, Lai Mohammed received the artefact from his Foreign Affairs counterpart, Mr. Geoffrey Onyeama, in the company of the Netherlands Ambassador to Nigeria, Mr. Harry van Dijk.

While receiving the antique treasure in his office in Abuja on Thursday, Mohammed said the return of the stolen Ife Terracotta marks a milestone in Nigeria’s efforts at pursuing the return of the country’s antiquities.

“It gives me profound joy to receive this very important antiquity, an Ife Terracotta, which is dated to be at least 600 years old. I am even more delighted that our efforts at pursuing the return of Nigerian antiquities,
which we launched last November, have started yielding fruits,” he said.

The Minister of Information and Culture said the government’s resolve to seek the repatriation of the nation’s timeless and priceless artefacts was strengthened by President Muhammadu Buhari’s marching orders for Nigeria to tap into tourism and other fields, where the country has comparative advantage, in order to generate income for the nation and secure jobs for the youth.

“One way of generating income for the country is if our cultural properties are exhibited around the world to a fee-paying audience, on the basis of proper agreement that acknowledges us as owners and confers the right benefits on us.

“But this is not possible for as long as most of them adorn the museums and private collections of others, who describe them as their properties,” he said.

Mohammed, who described the handing over of the artifact as a new beginning, said apart from the pecuniary benefits, the priceless objects wrought by the nation’s forebears are unifying factors among the diverse cultures in the country.

He said the Ife Terracotta was smuggled from Nigeria through Ghana to The Netherlands in 2019 with a forged document.

Following the interception of the artefact by the Dutch Customs at Schiphol Airport in The Netherlands, Nigeria was invited to prove her case against the suspected smuggler, which the country did successfully, hence the repatriation.

“Let me state here that Nigeria believes in joint international efforts to put a stop to illicit export and import of cultural goods. The issue of cultural property should not be a ground of rancour and discord among nations. That is if nations choose to tow the path which the Kingdom of The Netherlands has chosen by insisting on justice, fairness and amity,” Mohammed said.

In his remarks, the Minister of Foreign Affairs thanked The Netherlands for the efficient and expeditious manner in which it deployed resources to identify, retrieve and repatriate the Ife Terracotta to Nigeria.

Also speaking, the Ambassador of the Kingdom of the Netherlands to Nigeria said the return of the artifact is a fitting gift to mark the 50th anniversary of the UNESCO Convention on the Prevention of Illicit Trafficking of Culture Heritage, of which Nigeria and The Netherlands are signatories.

The Director General of the National Commission for Museums and Monuments, Prof. Abba Isa-Tijjani, has taken custody of the artifact for cleaning and treatment at the Conservation Laboratory before its eventual display to the public. 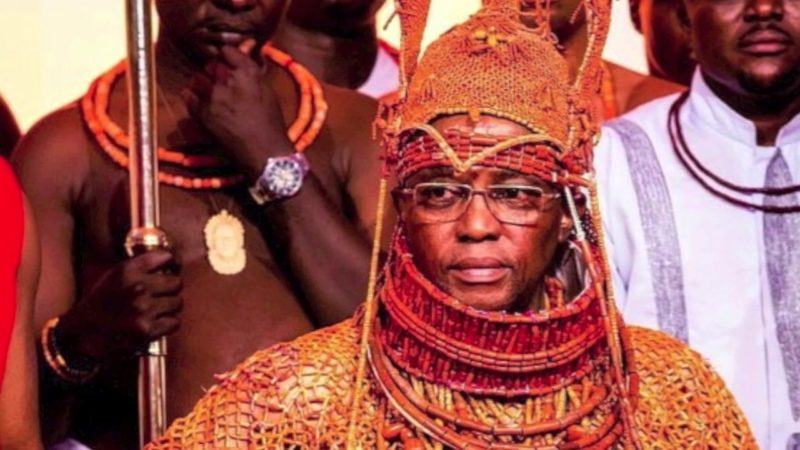 Oba of Benin, Oba Ewuare 11, has officially announced the birth of a princess, whose birth coincides with both his birthday and coronation anniversary.

A statement signed by Frank Irabor, Secretary, Benin Traditional Council, and made available to journalists in Benin on Monday, said the princess was born on Oct. 20.

The statement explained that the announcement was delayed till now because of the tension raised by the #EndSars protests of October.

“The Benin Traditional Council, on behalf of His Royal Majesty, Oba Ewuare 11, and the Royal Palace of Benin Kingdom, joyfully announces that her Royal Highness, Queen Owamagbe of Benin Kingdom, has been delivered of a baby girl.

“The infant princess and her mother are in excellent health and good spirit.

“It is our prayers that the princess will grow in good health, excellence and grace and that she shall be blessed by Almighty God,’’ the statement said.