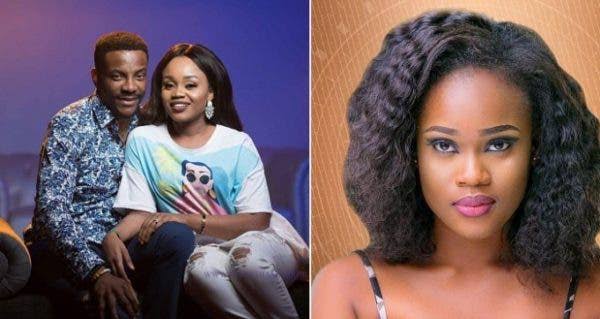 Ex  BBNaija housemate, precisely the Double Wahala season, Cynthia Nwadiora aka Ceec openly declares that she would  never have allowed the show host, Ebuka Obi-Uchendu leave her if they had dated.

This happened after a picture of Ebuka and one of the housemates in the ongoing Big brother Naija season sufficed. It has been implied that billionaire’s son; Kiddwaya has been given a preferential treatment, hence, the show conceals some of his misconducts. A Twitter user had claimed that the organizers have favourites, and Kiddwaya happens to be one of them as they always find a way to protect him.

Another tweep  then made reference to the 2018 big brother season, posing the question, ” What about Ceec that was Ebuka’s ex?” To which the double wahala first runner up replied;

“You say? Ex ke? Do I look like somebody that will date Ebuka and leave him or allow him to leave me. Lai lai!!! We die there!! Easy with the rumours ejor tori Olorun!!

In 2018, while the show was going on, there were series of reports flying all over that Ceec had dated Ebuka, and that was what gave her automatic access into the Big Brother house.

Following a chat she had with the then housemates that she has met the host before entering into the hhouse.

The accusation was however denied by the TV host. In his words,

“ Ceec said so many things she could not defend, She said something in the house that got mixed interpretations. She said she drove to my house and we had a conversation that made me put her into the reality show. Apparently she came to market something to me, in some event, I mean, I attend so many event in Lagos. I’m not supposed to remember everybody. …Apparently, this happened at Terraculture, nothing about this came to my mind until I heard what she said during the show….To the best of my knowledge, the first time I met Cee-c was when I spoke to her on stage during the show….The reason I didn’t debunk it was because I wanted it to die naturally. It was a very stupid rumour and I didn’t want to give life….I think she has crush on me. But I don’t know what else she has on her head. I’ve never spoken to her except while in the house when I was doing my job.”

From inception it has been said that the big brother game is known for nepotism, that is the practice of using power or influence to  favor their relatives or friends, as some of them always have a strong connection with either previous housemates, the TV hosts or they are just part of the high and mighty in the society.