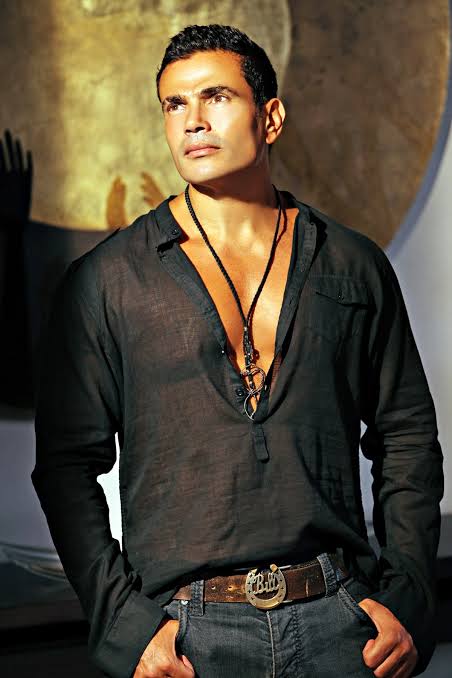 Amr Diab was born 11 October 196. He is an Egyptian singer, composer and actor. He has established himself as an acclaimed recording artist and author in most Mediterranean countries.

According to a research by Michael Frishkopf, he has created his style termed as “Mediterranean music”, a blend of Western and Egyptian rhythms. By 1992, he became the first Egyptian and Middle Eastern artist to start making high-tech music videos. His 2014 album “Shoft El Ayam” peaked at No. 1 on the Billboard World Albums Charts, making him the first Egyptian and Arab performer to accomplish such an achievement.

On 18 October 2009, Amr Diab won four 2009 African Music Awards in the following categories: best artist, best album, best vocalist and best song for “Wayah”; Amr Diab had been nominated by the Big Apple Music Awards.
In February 2011, Amr Diab released his hit single Masr Allet (“Egypt spoke”), followed by the release of his album Banadeek Taala in September, produced by Rotana. In 2012, Diab hosted the first Google Hangout in the Middle East during his performance in Dubai. In October 2014, Amr Diab released his album Shoft El Ayam, which topped his last album El Leila and again became the best selling album in Egypt on iTunes.

In July 2015, Amr Diab released a music video for his song “Gamalo” from his album Shoft El Ayam. In March 2016, he released Ahla w Ahla, his first album since he left Rotana Music. The album was produced by a record label known as “Nay For Media”. His new album Maadi el Nas was released in July 2017 with “Nay Records”.

Diab’s fame in the music industry has led him to experiment with other forms of media, such as film. Amr played himself in his first film, El Afareet, which was released in 1989. It also starred Madiha Kamel. His second film Ice Cream in Gleam (Ays Krim fi Glym), in which Diab starred in 1992, was chosen as one of the best five Egyptian musical films by the UCLA School of Theater, Film and Television.

The film was featured in the UCLA Film and Television Archive’s new program “Music on the Nile: Fifty Years of Egyptian Musical Films” at James Bridges Theater at UCLA on 6, 8 and 10 April 1999. David Chute of the Los Angeles Weekly termed it “observant” and “a big leap”.

His third movie was released in 1993, and was named Deahk We La’ab (Laughter and Fun). The film premiered in the Egyptian Film Festival in 1993. Amr played alongside international Egyptian movie star Omar Sharif (Lawrence of Arabia, Doctor Zhivago) and Yousra. Overall, Diab did not experience the same level of success in film that he had with his music career. Since 1993, Diab has focused on his singing career.

A boy from Tandale2 minutes read