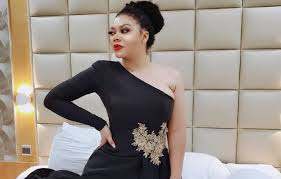 Multiple award-winning Ghanaian actress Nadia Buari has advised people in relationships to ‘absolutely and utterly’ walk out if they have to prove their worth.

According to the star actress, it’s unhealthy for one to try hard to prove their worth to partners in relationships.
Although, what triggered her statement is uncertain, the mother of four is known for offering frequent marriage and relationship counselling to her followers on social media.

She said the moment one has to prove their worth to someone is the right moment they have to walk out of the relationship.
Nadia Buari made this assertion in an Instagram post on Tuesday, September 15.
She shared a new selfie with the caption: “The moment you feel like u have to prove your worth to someone, is the moment to absolutely and utterly walk away.”

During an interview session in June 2019, Nadia Buari disclosed the reason she married secretly and had had four kids. The actress revealed it was a personal decision as she also stated that she felt her children are too young and innocent to be exposed to the media.

She said to Zionfelix that: “It was my choice. People know me as a character on the screen but behind the scene, I am Nadia Buari. I am not a reality star, that’s not what I introduced to the world.”

“I introduced a character so I feel like there is always supposed to be a border between my private and public life. It’s a personal choice. Now I feel my children are too young and I don’t know when they will ever be ready for this.”

The actress added that “They are innocent and don’t even understand the media and everything that comes with it. It will be so unfair to put them out there when they haven’t asked for it. I am just respecting the fact that they are very innocent,”

The actress who is considered one of the richest Ghanaian actress was born November 21, 1982. She received two nominations for Best Actress in a Leading Role at the Africa Movie Academy Awards in 2009. Nadia premiered on Ghanaian national television with the TV series Games People Play in late 2005. Her first major film was Mummy’s Daughter, after which, she starred in Beyonce: The President’s Daughter. Her role as “Beyonce” was her major breakthrough. Her movie career began with her playing a role in the TV series Games People Play in 2005, which she got nominated for best actress. She has starred in more than 20 movies. In 2013, she came out with her own movie called The Diary of Imogene Brown.

Buari moved from Ghanaian films to Nollywood films around the year 2008. Her breakthrough role in Nollywood was in the film Beyonce & Rihanna as Beyonce alongside Nollywood actress Omotola Jalade Ekeinde who played Rihanna. The film became very popular to both Ghanaian and Nigerian audience. Her other notable Nollywood films include Rough Rider, Beauty and the Beast, Holding Hope and Single and Married.

She is also known for co-starring in films with Nollywood actor Jim Iyke, which has also received attention. Films include the Beyonce & Rihanna film series, Hot Romance and Behind a Smile.
In 2013, she won the Pan African Actress award at the annual Nigerian Entertainment Awards (NEA Awards) in New York City.