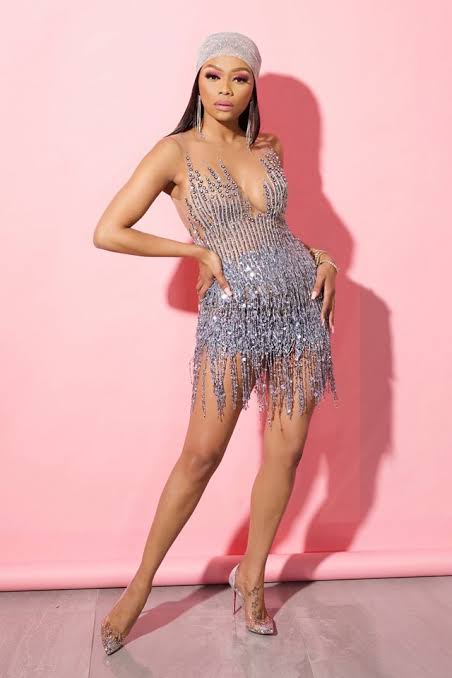 Bonang Dorothy Matheba was born 25th June 1987. She is a South African television presenter, radio personality, businesswoman, producer, model and philanthropist. Born in Mahikeng, North West, she is known for her flamboyant presenting skills and her signature voice. She presented the SABC 1 music show LIVE (now Live Amp) which built her spotlight in the industry. She is also known for being the first black South African to be featured on numerous magazines.

In 2011, she became the first South African celebrity to launch an online reality show called B*Dazzled. In 2013, she was the first international ambassador for the cosmetic brand Revlon, outside the US.

In 2014, she hosted the 2014 MTV Europe Music Awards pre-show, which made her become the first South African to host the pre-ceremony. In 2015, she became the first African to be given an E! News Special Africa on E!.
In 2016, she graced the cover of Forbes Woman Africa, alongside three other women who were all given a headline for being the Faces of Entrepreneurship. She released her book From A to B and premiered her own reality show Being Bonang, both in 2017. In 2018, she was featured on the power issue of GQ SA, for the September edition.

Bonang was born on in Mahikeng borough of North West, to Charlotte Mokoena, the Executive Vice-President for Human Resource and Corporate Affairs of Sasol, and Gampi Matheba, a senior lecturer at North-West University. She is of the Bantu-speaking ethic group Setswana. Matheba has an older sister, Reabetswe, who made it to the top 3 of Miss International South Africa 2018.After her parents split, her mother remarried, giving birth to a son named Thabo, (Bonang’s half-brother).

The family relocated to Leondale, in the east of Johannesburg, while Bonang attended Fourways High School, a prestigious government co-ed school in Fourways, Johannesburg.

In 2002, Matheba made her television debut on the SABC 2 kids show, Manhattan Fantasy Challenge while she was 15. She also appeared in other several SABC 2 kids shows. In 2007, Matheba auditioned for the inaugural season of the SABC 1 music show LIVE (now Live Amp) after leaving varsity. She was later crowned the winner of the show to co-host alongside Tbo Touch. Her presenting duties were a huge success and that’s were her sobriquet “Queen B” was created. Her final episode was aired on 31 August 2012 as she announced she was leaving the show. After her depart from LIVE, she hosted several other shows including Clash of the Choirs SA, Afternoon Express, Top Billing and KFC Taste Kitchen.

In 2008, Matheba made her debut drama role on the SABC 1 show, InterSEXions where she played Nurse Seipati. As of 2019, Matheba starred and co-produced the documentary film Public Figure, which premiered on March, 9 at Manchester Film Festival.

Matheba founded her production house called Bonang Matheba Entertainment in 2017. The production unit currently has one show, which is the 1Magic reality show, Being Bonang which focuses and showcases Matheba’s daily life.
Matheba is also popularly known for her great looks, fashion style and sense.