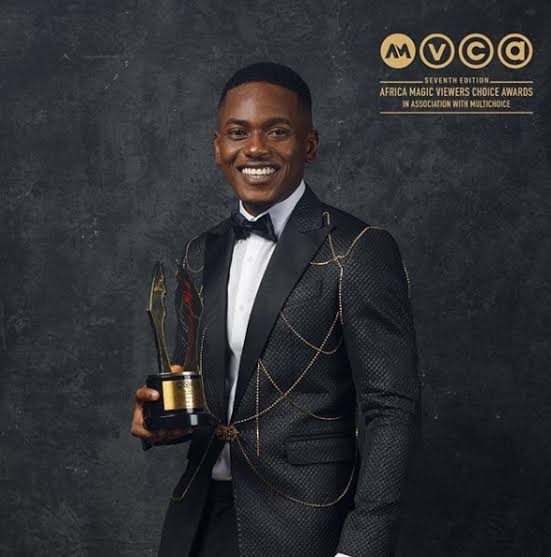 ”You are the next big star. I can see it. I can feel it. You repping so well. Welcome to stardom. May good health and long life be yours” Funke Akindele tells the AMVCA winner in his comment section. This was after Timini posted a picutre of him putting on a mustard yellow corduroy and a mustard yelllow head warmer, he captioned the post with, ”do am if e easy”.
The actor and digital creator replied to Funke Akindele by saying, ”Amen. From your lips to God’s ears sis. Love you”. Apparently, it is not just Funke Akindele who feels this way, youtbe content creator, sisi yemmie also feels this way, she also commented, ”I agree” in the comment section.

The statement, ”you are the next big star..” might have been because of Timini’s acting prowess. Timini happens to be in Funke Akindele’s upcoming project, ”omo ghetto the saga” Omo Ghetto is a trilogy that was released in the year 2011. It tells the story of twin sisters; Ayomide and Lefty, who had two different lives, but were reunited. The movie featured Funke Akindele who also doubled as the director and producer, Eniola Badmus, Rachel Oniga, Yinka Quadri, Adebayo Salami, Bimbo Thomas and many others.
Nine years later, Funke brings back the Saga of this amazing, funny and enlightening movie. Omo Ghetto the saga has scenes shot in Dubai, as Eniola Badmus, Funke Akindele and some other actors were in Dubai shooting before the pandemic. The global shutdown of activities, had a negative impact on Omo Ghetto the saga, as productions had to be stopped.
Timini will be playing the role of Don cash in the movie. This he revealed on his youtube channel when he went for the script read of Omo ghetto the saga.

The Nigerian actor, producer and digital creator had his debut in acting from acting in the soap opera ”Tinsel”, he then worked his way into public consciousness through his role as Tobi on MTV’s shuga. Played Jamal in ”Fifty”. His diversity also earned him a role in the hit web series, ”Skinny Girl In Transit”. In addition to this, never failing to deliver, he acted in ”Ajuwaya”, ”Isoken”, ”Kamsi”

Timini always delivers high quality performances and hence causing him to gain recognition in the Nigerian Film Industry. In 2018, he won The Future Awards prize for Actor of the year. One of the highlights of Timini’s career was when he won the AMVCAs – ”Best actor in a drama” for the blockbuster ”Elevator baby” in 2020.

On his instagram, Timini put out a list of the projects we should expect to see this year. The movies are ”country hard”, ”breaking point”, ”fate of alakada”, ”juju stories”, ”omo ghetto the saga”, ”forthright”, ”introducing the kujus”, ”killing victor’s wife”, ”kamsi”, ”Lagos big girl”, ”smart money woman season 1”, ”contract liars”, ”Tanwa Savage”. He captioned this post, ”Thanking God for the oil on my head and the amazing support system that I have with you guys. There’s plenty Gbas Gbos coming, so watch this space and remember to #watchTimini”

”Divorce Is Okay, Breaking Up Is Okay’- Olori Olaitan Says Months After Her Rumored Break Up With Alaafin Of Oyo3 minutes read

Zynnell Zuh reveals how much she spends on red carpet outfits.3 minutes read