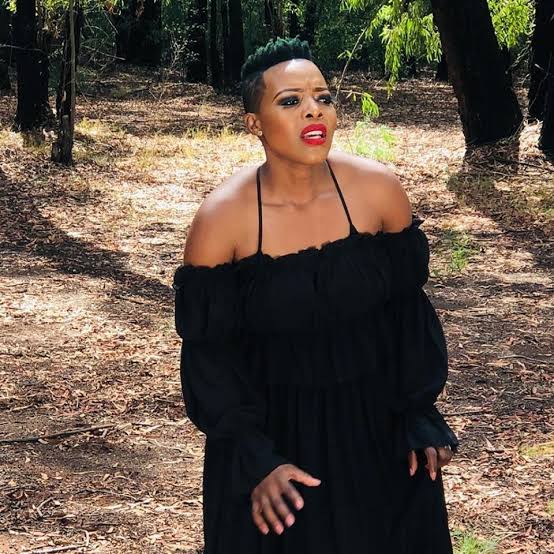 Reports have it that Jerusalema star Nomcebo Zikode has landed herself in trouble after she allegedly ignored Covid-19 lockdown regulations and performed at a packed venue.
Ironically, the musician is the one who snitched on herself when she posted a video of her performance on social media.

In the video posted by the musician, she can be seen leading a sing-along and encouraging audience members to sing into her microphone. Nomcebo was also flanked by dancers who pressed up against her while she was performing. The crowd of excited fans could be seen huddled together with no social distancing and no wearing of masks.
Posting the video on Twitter, Nomcebo wrote; “Thanks a lot, Thavhani Mall News Cafe, Thohoyandou, Venda,”

Nomcebo later realized the folly of her actions and deleted the video. By then, however, it was too late. She had already snitched on herself. One of her fans had already downloaded the video and uploaded it onto Youtube.

When questioned about the faux pas, Nomcebo’s management denied any responsibility for the events which occurred saying that it was the venue’s responsibility to ensure adequate health and safety protocols were kept. In an interview with TshisaLive, Bongani Dube said;
“If we are called for performance, whenever, wherever, it is the owner or management of the venue who are supposed to ensure requirements for Covid-19. As a performer, Nomcebo does not have the power to do all those things. Where were the police if the venue was overcrowded? I don’t like that people are saying she participated in it. She is a performer. It was at night. We did one song. We did our show and we left. We did not stay there,”

News Cafe brand manager Varina Singh said the company had since launched an investigation into the matter.
“We have been made aware of the concerns regarding an event hosted at News Cafe Thohoyandou over the weekend, and as the franchisor, we have launched an investigation.
“As a brand, we take non-compliance very seriously, especially since we have taken the necessary steps to minimise Covid-19 risks and exposure at all our stores with strict adherence. Pending the outcome of the investigation, the required action will be taken”.
Nomcebo Zikode is popularly known by her mononym Nomcebo, is a South African singer and songwriter. She is known for her collaboration with DJ Ganyani on their hit single “Emazulwini” and globally for her and Master KG’s hit gospel single “Jerusalema”.

She worked mostly as a back-up singer for other South African artistes like Deborah Fraser, Zahara, Lundi Tyamara and Nhlanhla Nciza for more than 15 years. She was also signed under Ganyani Entertainment, where she provided vocals for songs like “Emazulwini”, which received a nomination for the Record of the Year at the South African Music Awards, “NTO” and “Jabulile”, but as she did not own the songs, she was not allowed to perform them without the consent of the label. Her style of music is Gospel-house.
She gained worldwide popularity after working with DJ Master KG on his 2020 hit single “Jerusalema” for which she provided vocals. She had met Master KG after falling out with Ganyani Entertainemnt. After the success of “Jerusalema”, she released her debut album, Xola Moya Wam. On the album, she features Master KG on the title track, Bongo Beats on two tracks and Makhadzi on another track.

She has released an album titled Xola Moya Wam. She made a collaboration with Master KG and Makhadzi in some of her songs. “Xola Moya Wam”, the title track, is getting much air play and has reached the gold status on Risa. Another popular song on the album is “Siyafana”.

The Egyptian King of the Generation4 minutes read